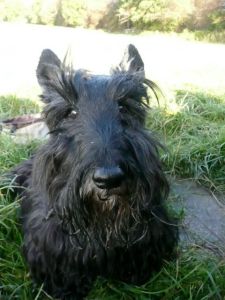 Finally, the hard work is beginning to pay off. Heartfelt thanks to all those that have helped in getting this far.

One small step for man ….. one giant leap for Scottish Terriers

SCOTTISH Terrier owners are being encouraged to support research into the genetic factors behind a form of cancer which is affecting the breed.

Scientists at the Kennel Club Cancer Centre at the Animal Health Trust (AHT) have agreed to help the breed council and UK’s breed clubs by collecting cheek swabs, which it is hoped can be used to identify the genes causing transitional cell carcinoma (TCC) in the bladder.
A 2005 report from the Scottish Terrier Club of America referred to research conducted at veterinary teaching hospitals in the north of the country which suggested a genetic predisposition to TCC in terriers and primarily Scottish Terriers. The research showed that the prevalence of dogs diagnosed with the disease increased by more than 600 per cent between 1975 and ’95  – read DogWorld’s full article

So if you know of a Scottie, please obtain a swab and send it onto the Animal Health Trust.

Be part of the ground breaking research and join my sadly departed Finlay as one of the foundation scotties trying to find a genetic marker for this devastating disease.