By Dr. Becker
In the last dozen years, numerous studies have emerged that suggest children who grow up with a dog or cat are less likely to develop allergies, asthma, and respiratory and ear infections than children without pets.

The Protective Power of Dog Dust

Up until now, scientists have been unable to pinpoint exactly what the protective mechanism is, but have speculated it is related to the hygiene hypothesis. The hygiene hypothesis holds that our modern lifestyles are actually too sanitary for our own good. Our immune systems aren’t being exposed to enough pathogens (bacteria, viruses, and parasites) to learn to do their jobs effectively.

Recently, a group of researchers at the University of Michigan conducted a study6 that provides exciting new insight into the question of why pets in the home often result in children with better functioning immune systems.

The scientists then exposed all three groups of mice to two asthma-related allergens. The mice that had been exposed to dog dust had much less inflammation in their airways and produced less mucus than the other two groups of mice.

It wasn’t actually the dog dust that was protective, however. It was what was living in the dust – microbes (bacteria). The researchers found that a single bacteria, Lactobacillus johnsonii, was in ample supply in the guts of the group of mice exposed to the dog-related dust. The microbes actually reshaped the community of living organisms in the rodents’ GI tract, and these changes affected the immune response of the mice and their ability to fight off certain allergens.

The researchers gave a live form of the L. johnsonii bacteria to the two groups of mice not exposed to dog dust, and those animals also developed protection against airway allergen challenge and viral respiratory infection.

The researchers concluded, “The study identifies L. johnsonii as a pivotal species within the gastrointestinal tract capable of influencing adaptive immunity at remote mucosal surfaces in a manner that is protective against a variety of respiratory insults.”

According to Time, study results could lead to additional research into enhancing gut bacteria in children as a way to protect them from allergies and asthma.

Thanks go to the Mercola.com (a website specialising in Natural Health Information Articles by Dr Joseph Mercola) and in particular to Dr Karen Becker, Pet Nutrition and Animal Wellness expert at Mercola.com, who writes thought provoking articles, like this one.

One response to “Before You Tidy Up After Your Pet, Consider This New Discovery” 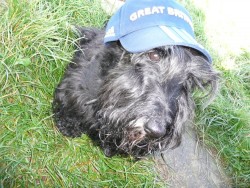